THIS ITEM HAS BEEN SOLD

This Cup is made of wood, 6.5″ high by 3″ wide with painted petals, Hebrew and sigils, ornamented with blue jewels. This is a unique, one-of-a-kind item. Once it’s gone, it’s gone. It just needs a motto and finish coat and it’s ready to ship.

This Water Cup is made of wood, 6.5″ high by 3″ wide with painted petals, Hebrew and sigils, and ornamented with blue jewels. This is a unique, one-of-a-kind item. Once it’s gone, it’s gone. It just needs a motto and finish coat and it’s ready to ship.

“Qualities of Water: passive, feminine, receptive, sustaining, subconscious, creative, fluidic, and generative. In an esoteric sense, the concept of water implies all liquid materials. Furthermore, the primeval waters, the image of all primal matter, contains all solid bodies before they obtain rigidity and form. The so-called “fluid body” of man is translated by modern psychology as a symbol of the unconscious or the archetypal feminine side of the personality. Water is seen as a symbol of the Maternal, the Great Mother, as well as the great unfathomable and mysterious well of Wisdom contained within the subconscious mind. In short, water symbolizes the infinite realm of possibilities, which precede all form and all creation.It is limitless and immortal — the Waters of Creation. Submersion in water alludes to a return to the pre-formed state. Like the Element of Fire, Water also symbolizes the ideas of transfiguration and regeneration.” Excerpts from the book Self-Initiation into the Golden Dawn Tradition 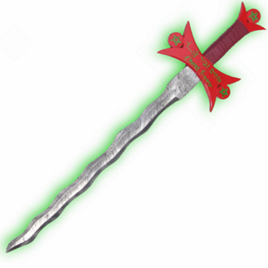 Our most elegant Magic Sword, featuring a wavy blade forged from Damascus steel. THE FLAMING SWORD or Lightning Flash is formed by the natural order of the Sephiroth on the Tree of Life. It is the descending current of Divine Energy, and it resembles a flash of Lightning. The Flaming Magic Sword incorporates this Qabalistic symbolism with the Golden Dawn's Magic Sword of the Z.A.M.
not rated $330.00 Select options 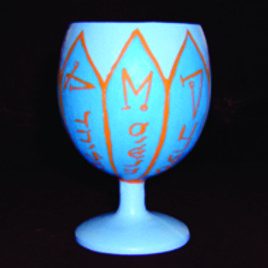 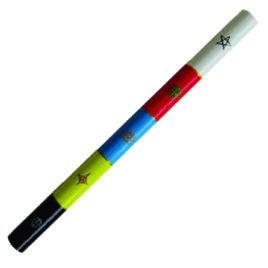 The Tarot Wand is a non-traditional Golden Dawn-style wand created by Chic and Tabatha Cicero and featured in the books Secrets of a Golden Dawn Temple and Creating Magical Tools.
not rated $50.00 – $55.00 Select options