The Tarot Wand is a non-traditional Golden Dawn-style wand created by Chic and Tabatha Cicero and featured in the books Secrets of a Golden Dawn Temple and Creating Magical Tools.

The Tarot Wand is a non-traditional Golden Dawn-style wand created by Chic and Tabatha Cicero and featured in the books Secrets of a Golden Dawn Temple and Creating Magical Tools. It is used to consecrate and give added strength to any divination using the Tarot.

The wand is divided into five sections that are painted in the colors of the five elements. One side of the wand has the sigils of the four Qabalistic Worlds, while the opposite side is embellished with the five “Sigils of Scales” as taught in Golden Dawn color magic (Fire in the King Scale, Water in the Queen Scale, Air in the Prince Scale, and Earth in the Princess Scale). 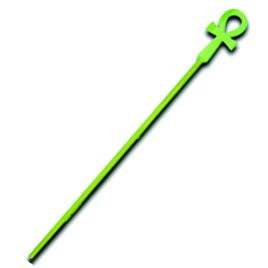 The ankh is a sacred symbol which alludes to the manifestation of the divine life force. This non-traditional wand can be painted in any color specified.
not rated $140.00 – $200.00 Select options 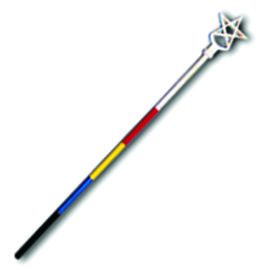 The pentagram represents the four elements of nature crowned and united by the fifth—spirit.
not rated $140.00 – $200.00 Select options

The Outer Wand of Double Power is a simple wand that is employed in the basic Golden Dawn techniques of invoking and banishing. Size: 26" long.
not rated $100.00 Add to cart