Golden Dawn Enochian Tablets: The Watchtowers of the Elements

The Enochian Tablets originated from a system of Magic  developed from the ceremonial skryings of Dr. John Dee and Edward Kelly. Beginning in 1582, the Elizabethan Magician and his seer continued to uncover the Enochian system over a period of seven years. The two men accumulated a great quantity of work, including an entire language with its own unique alphabet and syntax. According to legend, this Secret Angelic Language became known as Enochian because it was the Angelic language revealed to Enoch by the Angel Ave. The structure of the Enochian system was based upon a cipher and permutations of elements arranged on a grid of letters (the Tablets). From these were derived the names of various elemental powers, Angels, beings and spiritual dominions known as Aethyrs. Incorporated into the Golden Dawn curriculum 300 years later, the Enochian system of Magic is recognized as an important feature of modern Western Ceremonial Magic.

The Enochian system has been a part of the Golden Dawn curriculum since the outlines of the initiation rituals were first set down in the Cipher Manuscript. Divine Enochian names, as well as the Watchtower Tablets from which they were taken, are introduced to the student in the grades from Zelator through Portal. However, the Enochian system is not studied by the student in depth until he or she enters the Second Order.

The Enochian Tablets are four in number, each referring to one of the elements: Earth, Air, Fire, and Water. In addition to these four, there is another smaller Tablet, which is called the Tablet of Union, referring to the fifth Element of Ether or Spirit.

The Golden Dawn Shop offers many variations of the Enochian Tablets. They can be purchased as posters for $100 a set, or as full Tablets mounted on wood for $200 a set. All Tablets are signed on the back by Chic and Tabatha Cicero.

Series 1: The most common form of the Tablets we produce are the Traditional Tablets with Latin Lettering, based on the Reformed Great Table of the Archangel Raphael:

Series 2 below has the Great Cross and all Sephirotic Crosses in Flashing Colors:

Series 3: Another variation has all Crosses in Flashing Colors (as in Series 2) but also includes the border in the appropriate Elemental Color :

Series 4: There are also Truncated Pyramid Tablets, often used for skrying the various Enochian squares. (Please note that these are flat, not 3 dimensional):

Series 5: For a unique Golden Dawn Inner Order method of Divination, there are the Enochian Chess Boards, derived from the Truncated Pyramid Tablets:

Series 6: Tablets with Enochian Script Lettering. We also offer these Tablets with  the color variations described in Series 2 and 3 above):

Series 7: Tablets with Enochian Script Lettering with the Great Cross and all Sephirotic Crosses in Flashing Colors:

Series 8: Tablets with Enochian Script Lettering with all Crosses in Flashing Colors (as in Series 2) but also includes the border in the appropriate Elemental Color :

Westcott Series 1: Finally we offer the Cicero’s recreations of Dr. Wynn Westcott’s Enochian Tablets, described at length in Sandra Tabatha Cicero’s work The Book of the Concourse of the Watchtowers.

Westcott Series 2: In this variation, Westcott’s Tablets have been recreated without their ornate borders: 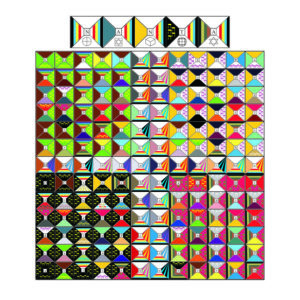 Below are several variations of the Tablet of Union, the fifth Tablet of Spirit which governs the Four Elemental Tablets: