The Soul’s Celebration of the Sun: A Ritual Drama (booklet) by Sandra Tabatha Cicero is a ceremonial presentation of Orpheus’ Hymn to the Sun, interpreted in the spirit of Marsilio Ficino’s Renaissance mystical dramatizations of the Orphic Hymns. 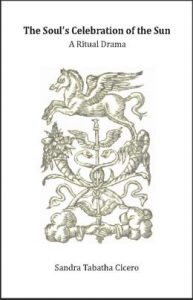 The Soul’s Celebration of the Sun

Ficino was deeply interested in Greek mythology which he believed to conceal valuable philosophical insights. He was skilled at composing musical settings for the Hymns of Orpheus, which he himself had translated from the Greek. The Orphic Hymns were eighty-seven short religious poems based on the beliefs of Orphism, a mystery religion that claimed descent from the teachings of the mythical hero Orpheus. They were composed in either the late Hellenistic or early Roman era. The ritual use of these hymns in the practice of natural magic was at the core of Ficino’s work with the Platonic Academy—his friends even referred to him as “Orpheus.”

The Soul’s Celebration of the Sun was composed as a staged ritual drama set before a live audience. This ritual was first performed at “Entering the Millennium,” a three day conference on the future of the Western Mystery Tradition held at the Dartington Hall Conference Centre in Totnes, Devon, England: October 15-17, 1999.