The Philosopher’s Stone was just the Beginning… 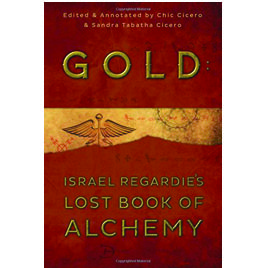 In this newly rediscovered text, famed occultist Israel Regardie sheds light on the psychological/spiritual meaning behind the symbols and metaphors of alchemy. To this end, he presents an important seventeenth century alchemical treatise for analysis, “The True Book of The Learned Greek Abbot Synesius Taken out of The Emperor’s Library,” written by an anonymous alchemist. As in his previous book on alchemy (The Philosopher’s Stone), Regardie discusses “The True Book of Synesius” in the language of Jungian psychology, magnetism, and hypnosis. But here the discussion is more specific, with Regardie citing his own unique experiences as a therapist and a healer. In Gold, Regardie explores the similarities between alchemical theory, Taoist philosophy, yoga, hypnosis, Zen Buddhism, and experiments with the human aura.

Fully edited and annotated by Chic and Sandra Tabatha Cicero, Gold is the first new book by Regardie published in decades and includes two important appendices. First, Regardie talks about the practical use of the concepts, and the Ciceros reveal a previously unpublished version of Regardie’s The Art of True Healing, containing the earliest version of this paper taken straight from the author’s personal advance copy, complete with Regardie’s own corrections penciled into the margins.

The editors also provide lists of Qabalistic, elemental, planetary,  and zodiacal attributions as well as a sample healing ritual based on The Art of True Healing that can be employed by readers who wish to use and adapt Regardie’s simple Healing Ritual technique. Includes a Glossary and an Index.